Vučić on Monday with Stoltenberg and on the Brdo-Brioni summit 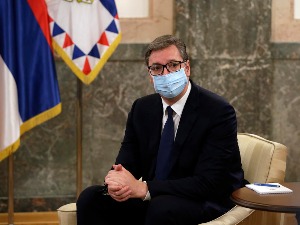 The president will meet with NATO Secretary General Jens Stoltenberg in Brussels on Monday.

The agenda of the bilateral meeting will include political dialogue, partnership and practical mechanisms of cooperation between Serbia and NATO, as well as the KFOR mission and its role in preserving security in Kosovo and Metohija, it was confirmed to Tanjug in Brussels.

The President of Serbia and the Secretary General of NATO are also expected to exchange views on the fight against the pandemic and the vaccination campaign, as well as on the economic progress and the European integration path of Serbia.

It is planned that after the meeting, around 5 pm, Vučić and Stoltenberg will address the media together from the building of the NATO headquarters in Brussels.

President Vučić arrives in Brussels directly from the summit of the leaders of the Western Balkans, Brdo-Brioni, in Slovenia, and then continues his journey to Prague, where he will pay a two-day working visit to the Czech Republic.

Jasmina: “I never want to talk to my father”

The Netherlands, with its breathtaking splendor and organization, returns to Eurovision under strict health measures – Latest News