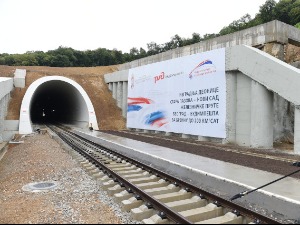 The meeting is attended by the Ambassador of Russia to Serbia, Aleksandar Bocan-Kharchenko, the General Director of RZD, Oleg Belozjorov, the Minister of Construction, Transport and Infrastructure, Tomislav Momirović, and the President of the Provincial Government, Igor Mirović.

After the meeting, Vučić and the representatives of RŽD will attend the connection of the railway track on the section Stara Pazova – Novi Sad, on the viaduct in the flooded part of the Danube, which will solemnly mark the completion of construction works on that section.

From the old railway station Chortanovci to the location of the connection of the tracks, President Vučić and the representatives of RŽD will come by train.

The total value of the construction of the Belgrade-Budapest railway through Serbia is about two billion dollars, and the railway through our country will be about 184 kilometers long.

The project was agreed between Serbia, China and Hungary as part of China’s global “Belt and Road” initiative.