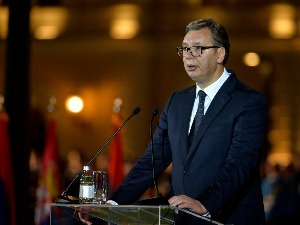 Tonight, the President of Serbia, Aleksandar Vučić, told the Presidents of Montenegro and Croatia, Milo Đukanović and Zoran Milanović, regarding the insults against Serbia and himself, that Serbia will continue to give them a message, no matter how much they attack, but that Serbia will not allow them to force it. give up his path of victory.

“There is no insulting message for any of them (Djukanovic and Milanovic). I have only one clear and precise message: Serbia will continue to deal with its economy and progress and growth and will be more successful and Serbia will not respond to you in a chauvinistic way. or any other messages, “Vucic told Pink TV tonight.

“You do your job, criticize, attack, do whatever you can, and we will lend you a hand and wish the best relations with Montenegro and Croatia, but you will not force us to change our winning path and change everything we are. they did well so that our country could finally catch up and overtake others, said Vučić.

President Vučić pointed out that Serbia is on the right path, progressing, working well and having results, and it does not have to look back at anyone else, and those who do not have results attack others.

Asked about numerous attacks from the region, after the visit of German Chancellor Angela Merkel, Vučić emphasized that he was satisfied with that visit.

“Merkel’s visit is important for us. Germany is the largest European power, our largest foreign trade partner, the largest investor, one of the most powerful countries in the world, and the chancellor the most powerful politician on the international scene, whose assessments and views are read”; he said.

In a conversation with Pink, Vučić expressed his gratitude to Merkel for everything she did and for her support for the Western Balkans and Serbia.

“In the foreign policy sense, that is one of the most important things in your career when you have a good relationship from the beginning to the end of the mandate with such a leader. Of course, there is always a little envy, a little need to blacken Serbia,” he added.

Vučić said that the essence is that Serbia is on the right path, progressing, working well and having results, he does not have to look back at anyone else.

“I don’t have to invite someone and then the only topic will be Zoran Milanovic, Bakir Izetbegovic, Milo Djukanovic. When you don’t have your results, you have to attack. I would leave that role to them. We will try to develop our country and have good relations with everyone. “, said Vučić.

Vučić: Đukanović sees the future of Montenegro in the disappearance of Serbs

President Vučić stated that they understand the messages sent from Zagreb very well and that they only confirm that Serbia is doing something great, when they have to pay so much attention to it in the region.

“If I were illiterate and didn’t understand the language, I would understand those messages, everyone would understand. But I’m not fascinated by the content. That says – we don’t have smarter business, obviously Serbia is doing something very good, when we have to pay so much attention to it,” said Vučić, commenting on the messages from the joint press conference of the presidents of Croatia and Montenegro yesterday in Zagreb.

Vučić said that he and Milo Đukanović see the future of the region differently.

“He sees the future of his country in the assimilation and disappearance of the Serbian population, I in respecting the right of everyone to be on their own. They would like to build their country so that there are no Serbs, or at least in the beginning they have no political rights. they take the church, and then the right to call themselves Serbs, “said Vucic.

As he says, in Montenegro they came up with a trick for the census, by making a special section – nationality, so that, he says, everyone would say that they are Montenegrins, while a special part would be – an ethnic group.

“I don’t know how they made a distinction, it is known who are members of national minorities and who are ethnic groups. In Montenegro, they would like to reduce Serbs to an ethnic group,” Vucic pointed out.

Vučić said that he had nothing personal against anyone in the region, but that he had against the policy based on the disappearance of Serbs, with the alleged story that they were facing problems with Serbia, as a hegemon.

“I can say again – we are not interested in anything else, except for the elementary rights to survival, the life of Serbs, which we provide to others,” said Vucic.

Conversation with Bosniaks of historical significance

Speaking about Bosnia and Herzegovina, Vučić said that the agreement with the Bosniaks was of historical significance, and that the essence was in the healing dialogue with Sarajevo.

When asked which card Bakir Izetbegović plays and what his latest statements mean that Serbia and its President Aleksandar Vučić should not send vaccines or grain to Bosnia and Herzegovina, nor say nice words, but that he expects to stop persecuting defenders, Vučić said. from Istanbul where he resides, said that Izetbegović, if it were fair, would say that vaccines were sent because people need them, and that a commercial relationship applies to grain, but both children and the elderly live from it.

Vučić assessed that Izetbegović was wrong, and that he spoke about relations regarding war crimes and arrests because of political points.

He appealed to our judicial authorities to get in touch with the BiH authorities and not to do this to each other, but to see which cases we can take over.

Vučić also assessed that dreams are empty and that he never reacts when the special status of Sandžak is mentioned, and asked if they are sure that they want that.

He believes that Bosniaks in Sandzak, most of whom are in three municipalities, are more satisfied with the state’s attitude towards them today.

He also points out that Serbia does not want to change its borders, but wants to cooperate with Sarajevo and the Republika Srpska as part of BiH.

“We want good and friendly relations for Bosniaks, but don’t blame us for loving RS, as well as for not loving Tutin, Pazar … I want the highway to Sarajevo for Bosniaks to reach both Belgrade and Sarajevo, to be equally close.

That is the policy of the future, “Vucic said. Those who live in Serbia will respect Serbia, and let them love Sarajevo as well as Belgrade in Banja Luka.

He also notes that we have a difficult legacy in history with Sarajevo, but the essence is in the dialogue.

“We must understand the pain of Bosniaks, but also those of Serbs, both previous and last wars, in order to understand each other better,” he pointed out.

Also, we must have better relations with Croatia in the future, not based on love, but rational and based on common interests.

He also says that the cooperation with Northern Macedonia and other countries in the wider region is being forgotten, stating how much the trade exchange with Hungary, Bulgaria, Turkey is growing …