We should not suppose solely of the fabric dimension, but additionally of purpose 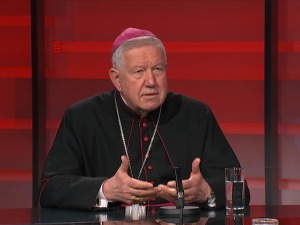 Belgrade Archbishop Stanislav Hocevar said that, for the sake of better understanding, the church does not celebrate Easter, but actualizes the entire history of salvation.

“The liturgy means exactly what used to happen historically, in the person of Jesus Christ, now it happens in a mystical, spiritual way in the liturgy,” Archbishop Hocevar stated during a guest appearance on the RTS morning program.

He added that the Catholic Church, in continuity with the Jewish people who celebrated Passover, as a remembrance of coming out of slavery from Egypt, celebrates the spiritual Passover, to make the transition from spiritual slavery.

“Jesus had the great task of helping humanity towards that spiritual liberation, which is more important. That should be strongly indicated today. That is why Catholics celebrate, it can happen when the people of Israel celebrate their Passover,” the archbishop pointed out.

He reminded that Jesus entered Jerusalem gloriously on Palm Sunday and that it was there that he died and redeemed and liberated us with his death, and that is why he celebrated Passover, the last supper, which we remember tonight.

“Tonight we actualize that Holy, Last Supper, when Jesus came to the table, took off his ceremonial vestment, washed the apostles’ feet, to warn them that they should have a new mentality of service, not of domination. Then he instituted the mystery of the Eucharist. , that today is a liturgy, or we say Holy Mass. At the same time, he appointed all the apostles as priests “, Hočevar pointed out.

The usual liturgies are not held on Good Friday

When it comes to Good Friday, Hocevar stated that the usual liturgies are not held and he does not consecrate God’s bread, but we only eat with consecrated spiritual gifts.

“Saturday is a non-liturgical day. Why? Because Jesus is in the tomb and while he is dead, the church does not celebrate anything in the liturgy, but only invites the faithful to pray more and in some way, as they should today, when so many people die. , to cry in a way and to realize that we cause death with our Sundays, and that on the night between Saturday and Sunday, he rose from the dead on the night, “said Hocevar.

The Archbishop of Belgrade reminded that during the three days before Easter, the bells do not ring, because they remind us of joy, and during life without God, we cannot be joyful.

Speaking about the Easter Vigil, the Archbishop explained that Easter is the old word for resurrection and that there is no agreed opinion on where that word comes from.

He emphasized that Easter is celebrated on Sunday with a solemn liturgy, since Easter is still lived in consecrated bread, which is why we receive communion, because, as he said, holy communion is the energy of the risen Christ.

The most common symbol of Easter is a painted egg

Archbishop Hočevar stated that the most common symbol of Easter is a painted egg, but also that Easter candles are lit and statues of the risen Christ are placed.

“As a little chicken pierces only that shell and comes out, it is a symbol of Jesus’ death. He came out himself. It is a call to us to come out of our ego and to be open to others,” the Belgrade archbishop emphasized.

He stated that his message before Easter is that we must not think only of the material dimension, but also of reason, and that we should work reasonably, since reason opens us to objective reality.

“We are all slaves of emotions today, so we do not know how to have the right relationships. First of all, to have great trust in the Lord, to know that with him we can win in respecting every man, our own being and to be filled with that spiritual the energy we represent in the mysteries of confession, the Eucharist. In this way we are nourished by love and then we always know how to behave, “said Stanislav Hočevar.

51 infected in the Home for the Elderly in Prishtina

Haziri: The ten martyrs of Zhegra had been sacrificed for the liberty of the nation