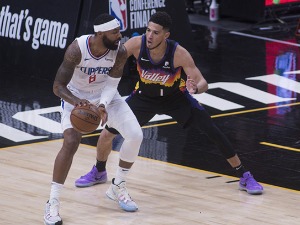 Where they stopped against Denver, the Suns continued against the Clippers – they recorded a triumph against the team from Los Angeles 120: 114 and took the lead with 1: 0 in the final series of the West.

Devin Booker was unstoppable, he recorded the first triple-double in his NBA career, but the guests almost made a big turnaround with threes in the final of the match.

The match was tied during its greater course, and the Suns gained a decisive advantage in the first half of the last section, when they reached an eight-point advantage.

In the last two minutes, they entered with a lead of 116: 106, but a series of Clippers of 8: 0 followed and the match entered an uncertain end.

However, Booker once again took matters into his own hands, first knocked hard, and then brought the final triumph to Monti Williams’ team from the free throw line.

Booker finished the match with 40 points (18 in the third quarter), 13 rebounds and 11 assists, while he was followed by Diandre Eaton with 20 points. Paul George stood out in the defeated team with 34 points, Reggie Jackson added 24.

It should be noted that both teams played incompletely. Chris Paul did not play in the Sansa team due to covid protocol, while Kavaj Lenard and Serge Ibaka were not in the visiting team due to injuries.

Phoenix took the lead with 1: 0 in the final series, and the second match is also played in Arizona.

Over 1,500 police officers are engaged for the tourist season, patrolling even by bicycle

Mici before the matches in the Champions League: To lower our heads and give the maximum – Latest News