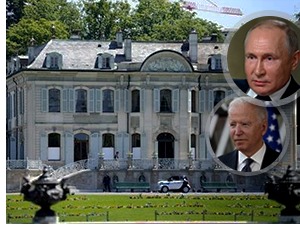 Standing alone in the middle of the park, the cult Villa de la Grange is partially sheltered on the south side by magnificent trees. On this side, too, the buildings have been preserved in their original layout: a house, a barn, a stable, a shed and a beautiful fountain with a double basin. The north side of the villa has a terrace with a perfectly clear view of the park and the lake and an extremely elegant facade.

Traces of human presence from the Neolithic have been found on the site of today’s park. Two stone pillars lying on the side can be seen in the upper part of the park, not far from the ruins of the villa of the Roman official Tito Front.

In the 18th century, the agricultural area was named La Grange. The owners, the Lulin family, built the manor between 1768 and 1773 and arranged the French garden. The design of the house is attributed to the architect Jean-Louis Beauvet, by analogy with the architectural style of the French Chateau de Crane. Located on the outskirts of the city, the villa was mainly used as a summer residence and to receive distinguished guests.

The ownership passed from the Lulin family to the Favre family, who transformed the house and the park, setting up unusual curved paths, as well as a pond and stones. They also built a monumental entrance with lions, an orange pergola, and completed the villa with a top library in 1821, which still houses a prestigious collection of books with about 15,000 titles.

Two red chairs are placed on both sides of the big globe, ready to welcome the two presidents.

William Favre bequeathed the property to the city of Geneva in 1917, and a year later to the library, which has been managed by the Geneva library ever since.

It hosted the participants of the First Geneva Convention, but also the Pope

Villa la Grange hosted the closing ceremony of the First Geneva Convention, which marked the birth of humanitarian law.

More than a century later, in June 1969, Pope Paul held a Mass in front of about 70,000 people, in a park that was then the only large enough space in Geneva to accommodate so much.

“In this historical hour for humanity, full of danger, but full of hope, it is up to you to build justice and in that way ensure peace,” Pope Paul said at the time.

This is also the message that many remember in recent days before the Biden-Putin summit, at a time of very tense relations between the two world powers.

La Grange Park is the perfect environment for a villa, partially protected by large trees on the south side, which from the north side provides a completely unobstructed view of the lake.

For the last week, the place has been a real hive of activities. On the one hand, inside, the masters are retouching the gilding, heavy candlesticks are being cleaned, and outside, strong forces are grouped in charge of security.

At the entrance, there are still two stone lions, symbolic guards of the upcoming summit.