A younger Serbian scientist, a member of NASA’s crew, explains why it is very important discover Mars 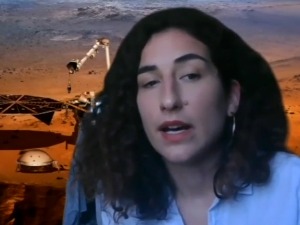 Andrea is a master geologist and is currently pursuing a doctorate at Curtin University in Western Australia. The topic of her dissertation is planetary geology and it is related to NASA’s “Insight” mission on Mars.

“Insight is a lander that has several geophysical instruments, including a seismometer that detects earthquakes, which, unlike those on Earth, can be caused by meteors in addition to tectonic and thermal activity,” said Andrea Rajsic, a doctoral student at Curtin University in Australia.

Its task is to study these meteorite impacts on the surface of Mars and decipher seismic records. Because Mars has a much thinner atmosphere than Earth’s, meteors pass more easily and earthquakes are more numerous.

“To date, about 500 earthquakes have been recorded, although they are weaker than those on Earth,” says the young scientist.

Being part of a team with such an important mission is an invaluable experience, says Andrea. Meetings with mission members are every two weeks, and knowledge exchange is more frequent.

“With the Insight mission, we learn a lot about the subsurface geology of Mars, and the main mission of the rover, Instrajnost, is to discover the traces of life,” explains Andrea Rajšić.

Mars and Earth are the planets of the inner solar system and have a crust, core and mantle. The earth is divided into tectonic plates while the crust of Mars is complete. The similarity is in the geomorphology.

Pokuševski did not have fun Bogdanovic’s shot in…

Mars also has 4 seasons, which last twice as long as on Earth, so a year on Mars is the same as two on Earth.

Because gravity is weaker on Mars, Andrea explains that volcanoes up to 20 kilometers high can be found on that planet.

It is no longer a question of whether we will go to Mars, but when

Scientists jokingly say that the Red Planet is Earth’s older brother, and all the changes that happened on Mars will happen or are already happening on Earth.

And that is another significance of the missions sent to Mars. Knowledge of Mars enables a better understanding of the planet Earth, but also the increasingly frequent questioning: “Is life possible on the 4th planet in the solar system?”

“We will wait for the new data that Perseverance will send, but what is important is that there is water on Mars, but as far as we know, it is not in a liquid state,” says Andrea Rajšić.

The problem is the atmosphere on Mars, because it is built of 96 percent carbon dioxide, as well as strong sandstorms.

“It’s no longer science fiction that people will go there to explore and I can’t wait. “The more we discover about Mars, the more ideas we get about how to overcome problems,” the young scientist points out.

A few days ago oxygen production on Mars has been successfully tested. The “Moxie” device on the rover Perseverance managed to produce about five grams of oxygen from carbon dioxide in an hour of work, which is enough for astronauts for 10 minutes of life. The news delighted scientists, but also gave hope to enthusiasts who believe that one day a trip to Mars will still be possible.

United Nations Convention on Precedence Environmental Targets for the Safety of…

How a coup d’état was ready in Germany – a prince, a choose and…