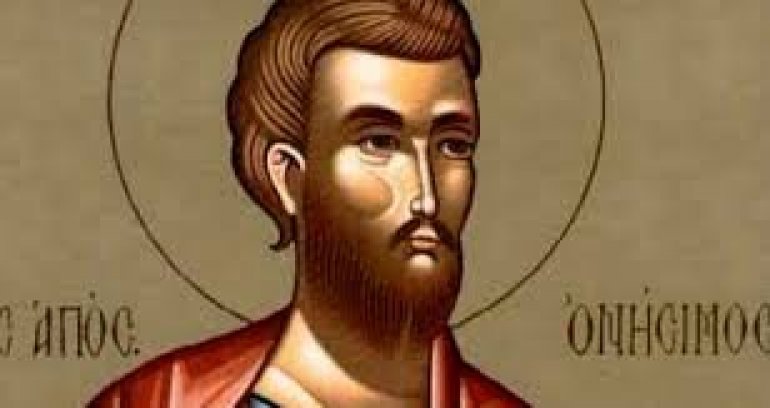 According to the legend in which all Christians believe, except for the twelve great apostles who knew Jesus and were his first disciples, God chose seventy other apostles who would preach the Gospel and spread Christianity. One of those “little apostles” was Saint Onesimus.

The story goes that Onesimus was a slave of a respectable and rich man in Phrygia before he fled to Rome and, hearing the Gospel of the Apostle Paul, wanted to become a Christian.

He was baptized, and as its owner soon became a Christian, the two reconciled and became friends and close as brothers.

The apostle Paul played a great role in the reconciliation of the owner and the former slave, who wrote a letter to the owner of Onesimus, which is still considered one of the most touching written compositions that exist in the Holy Scriptures.

“We pray for my child Onesimus, whom I gave birth to in my fetters kovima For perhaps that is why he parted with you for a short time to receive him for eternity, no longer as a slave, but more than a slave, a beloved brother…”.

Saint Onesimus later became a bishop and led the Christian community for a long time and justly. According to legend, his body was taken by a rich woman and buried in a silver coffin in the year 109.

The Holy Apostle Onesimus is the protector of all people who, regardless of their origin, achieve results with diligent and diligent work.

Do you have a dream? Go to church today and pray to this saint. His life teaches that nothing is impossible and that, with the help and blessing of Christ, every dream is attainable and achievable.

The first noises on the planet Mars are recorded