Djukanovic, you’ll not cease Montenegro or me 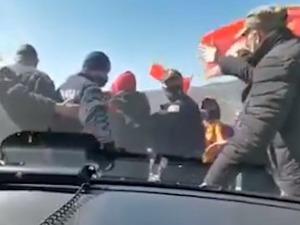 Zdravko Krivokapić posted on Twitter two videos from the official car, which he said earlier today that attacked at the exit from Nikšić and that his daughter was in it.

“Did you mean this, Djukanovic, when you said yesterday that you would fight for Montenegro by all means? You will not stop Montenegro, nor me, nor at the cost of life. Peace, order and law!”, Krivokapic said. with published recordings.

The Police Administration announced that the Niksic police “documented the event about which the prosecutor will be informed”.

By the way, hundreds of citizens protested today in front of the Government building in Podgorica and in other cities, dissatisfied with the announcement of changes to the Decision on the criteria for acquiring Montenegrin citizenship, and incidents were reported during the protest.

Unexpected / Murat “forgets” Sindi, undresses Ola and gives her the first kiss in…