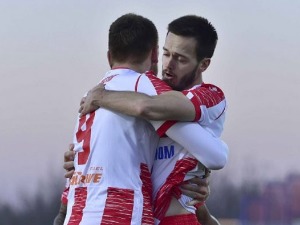 The red and whites recorded their 22nd triumph this season and continued their march towards a new title. TSC offered great resistance, managed to equalize, but dropped the player more. The star scored two more goals and reached a well-deserved victory and three new points. Zvezda now has six points more in relation to the second-placed Partizan and a game less.

Without my content in the first half. It seemed that both teams were too careful, so there were no more likely opportunities in front of both goals. The ideas of the coach regarding the defense were respected. Both teams defensively looked great, but they failed in the attack.

Hard, solid, real championship game. Sanogo missed several chances on both sides, and the most likely one in the finish of the first part of the game, when his header from a few meters, goalkeeper Filipović managed to stop.

The star continued with the field initiative in the second half as well. Pavkov and Srnić came in from the bench and the red and whites got more options in the attack. The red and whites were constantly pressing the opponent’s goal. It paid off in the 54th minute.

Ivanic did great in the penalty area on the left side, he managed to keep the ball and employed Pavkov in the box, who forwarded it into the net.

Just three minutes later TSC comes to the penalty spot. Gajić knocked down Zec in the penalty area with both hands, and the judge only had to point to the white dot. Due to this start, Gajić earned a direct red card and Zvezda continued with a player less.

Lukić was a reliable performer of the most severe punishment, and the host thus managed to equalize.

Great excitement in the 67th minute. Ivaniće flew into the penalty area, entered in front of Tomanović, followed by contact and the judge pointed to the white dot. Tomanović could not reconcile with this decision of the judge, so in addition to the card for the misdemeanor, he also earned another due to an objection, so he also had to be off the field. Kanga was precise and Zvezda took the lead with 2: 1.

Four minutes later, Zvezda reached a two-goal advantage. This time, the action on the right side, Srnić fought well with the guard and hired Pavkov, who scored again.

The star then slowed down the pace of the game. Several more opportunities were created in front of both goals, but there was no change in the result.

This is how the match in Senta went.

Ana clarifies the truth of her relationship with Fation, also reveals the reason why she never went out with Mevlani