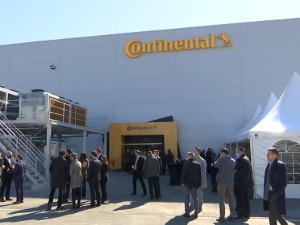 The factory will produce the most modern electronic parts for the automotive industry, which will bear the label – made in Serbia.

During the tour of the factory, President Aleksandar Vučić said that this is an advanced technology that will be developed by Continental in Novi Sad.

Representatives of Continental introduced the president to the products, explaining to him that not only instrument panels and displays will be made there, for example, but also smart control systems.

“Systems, complete systems, and solutions for the automotive industry are being made here, which will dictate the trends on the world market,” said Sasa Ćoringa, General Manager of “Continental Automotive Serbia”.

The value of the investment is 140 million euros.

Due to new projects, the training center of the laboratory, but also the need for new jobs, the company will expand its space in the center of Novi Sad by another 1,500 square meters.

The opening of the factory was also attended by the Prime Minister Ana Brnabić, the Minister of Economy Andjelka Atansković and other representatives of the state and Novi Sad, as well as the leaders of the German company.