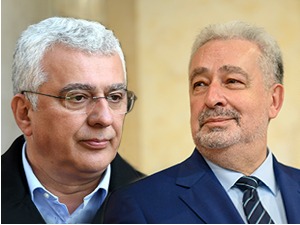 Andrija Mandić pointed out that Zdravko Krivokapić’s claims that the Democratic Front (DF) has partnership relations with the Democratic Party of Socialists (DPS) are a continuation of the untruths used by the Montenegrin Prime Minister.

Mandic reacted to the statement of Krivokapic, who said that the DF and the DPS were planning to overthrow the Government and the Assembly.

“So, it is not true that the DF destroys at any time with the DPS, but he and Milo Đukanović declared the Serbian people genocidal, Serbia the enemy, and fired one of his ministers with them. He was still there the night he refused to “Signing the Basic Agreement with the Serbian Orthodox Church has lost the support of the parliamentary majority that elected him head of the government, but it is difficult to estimate that they will further disgrace and together with the DPS vote on resolutions according to which Serbs are the greatest enemies,” Mandic said in a statement.

He points out that Krivokapić is a man who “betrayed his own list, his closest associates, the Serbian Orthodox Church and, above all, the people who voted against the DPS and with whom we all made a firm agreement.”

“He writes letters to the people as if he was directly elected by that people, and not by elected people’s representatives who are individually guarantors of the agreement reached. So, he was not appointed by the people, but at the beginning of everything, at the request of the Church, I gave him my place. “At the head of the list ‘For the future of Montenegro’, and my colleague Milan Knezevic proposed him as prime minister, and then 27 deputies of our coalition voted for the prime minister,” Mandic said.

As he said, it seems that the “Maybach”, the government plane, bodyguards for him and his family, a comfortable armchair, meetings with important people he watched only on television while he was the former rector’s closest associate, grew close to Krivokapic’s heart, so he is blind “to the reactions of those who chose him that they no longer want him there.

“As tempting and beautiful as it may seem, it is not natural to be openly embarrassed in the old days, making secret agreements with the DPS, which he now wants to attribute to others,” Mandic concluded in his reaction.

Krivokapic: I keep my word

I will not allow you to push the Serbian people, who have been forcibly marginalized within the socio-political opposition for decades, into the same process again, said the Prime Minister of Montenegro, Zdravko Krivokapić, to the leader of the Democratic Front, Andrija Mandić.

Krivokapic said that Mandic does not accuse him with his performances, but his coalition partners, and that when he is already calling for the truth, he should also speak it.

“I could not vote together with the DPS last night, because I am not part of the Parliament, but I am part of the executive, nor would I vote with the DPS, but parts of your coalition have done and are doing that, the part that, not to a small extent , I draw my legitimacy from the votes of Serbs, in whose defense you are allegedly standing up today. I did not vote last night, nor did I propose a resolution. You, through your coalition partners, voted for the resolution, so you incorporated it into the amendment. that is what your voters are watching, who are allegedly defending me, “reads the reaction of the Prime Minister of Montenegro.

He points out that, while the Parliament was boycotted by the opposition in the previous parliamentary convocation of which they were a part, it was Mandic and his coalition who were the first to return to the Parliament with the DPS.

Krivokapić also referred to Mandić’s allegations that he was given a place at the top of the list at the request of the Church, and that he was not appointed by the people, but by him.

“Mr. Mandic, thank you for that, but you know very well, as I do, that if you did not have a church, if we did not have a wise, reconciling and magnificent role of the church, it would not help us all that you Mr. Mandic, I keep my word, and when it comes to the material, the sale of Majbach, for which the procedure is largely underway, and when it comes to the spiritual, the Basic Agreement, which I will, of course, sign, “Krivokapic said.

He asked Mandic not to tell him about the Church, because his coalition partner “under Ostrog even turned on the blessed Metropolitan Amfilohije”.

“Only you do not tell me about the church, you, who came to the Church of Christ’s Resurrection almost two hours late, to the funeral service of the blessed Metropolitan Amfilohije by the blessed Patriarch Irinej, because you were busy just a few kilometers away,” he said. Krivokapić.

He told him to do damage to the Serbian people in Montenegro again, when, as he claims, even though they took power, he is again pushing into the opposition and protests.

“The Serbian people are not yours, Mr. Mandic, and I will not allow you to push the Serbian people, who have been marginalized for decades within the socio-political opposition, into the same process again. The DPS used to do that, and now you and the DPS want that.” “, stated the Montenegrin Prime Minister.

He adds that he will not allow it.

“I will not allow you to use victims for political purposes, we cannot change the past, but we can influence the present and the future of all of us. Mr. Mandic, I am not perfect, just as our common process cannot be perfect after three decades of absolute imperfection. I know: I will do my best to make Montenegro a country where such political games, political boycotts and daily political blackmail are a thing of the past, and in which we will all talk about long-term visions, development, prosperity and reconciliation, “he concludes. are in response.