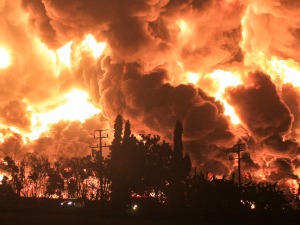 The fire started on Sunday shortly after midnight, and videos were posted on social networks showing a large flame engulfing the refinery and a large explosion being heard, Reuters reports.

The agency states that they stated from Pertamine that the cause of the fire in the refinery is not known for now, but that it is suspected that a big storm may have caused this accident.

A company spokesman said that five people were transferred to the hospital because of the burns they received in the fire.

The state oil company said the refinery, which processes about 125,000 barrels a day, would be closed and oil flow controlled to prevent further expansion, and that fuel supplies would not be disrupted by the fire.