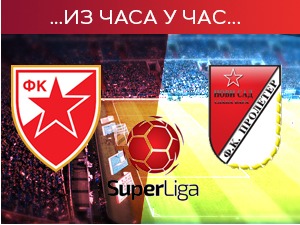 Finally, Pavkov found his way to the rival’s net, assisted by Ben after a great attack on the left side. The line referee raised the flag, the main referee Novica Angelovski annulled the goal, but he made a mistake because the player from the Comoros was not in an illegal position.

They don’t stop the red and whites and want a new goal by half time. Veljko Nikolić was in a new promising situation, he shot under the crossbar, but Župić once again intervened brilliantly.

From the right flank, Gajić centered all the way to the other side, the highest in the jump was Rodić, but his header was defended by Župić and prevented a safe goal.

Another great action ended with a goal by the red and whites. On the right side, Kanga, Ben and Gajić combined, the right back returned nicely to the penalty spot, where Veljko Nikolić accepted, and then hit the left corner of the goal of Novi Sad – 2: 0.

It smelled like Zvezda would score a goal and that happened after another mistake by the visiting team. One harmless dog on the side turned into a chance because the defensive player slipped, the ball reached Rodić on the left side, and he was looking for Pavkov in the box. Leandro reacted in front of him and hit his own net for 1: 0!

Milan Pavkov missed a great chance! Marijanović made a big mistake and enabled the guy from Begeč to go “1 on 1” with the goalkeeper, he shot the bottom right corner, but he was almost inaccurate.

Fantastically, El Fardu Ben took a free kick from the right side. He crossed the living wall and already overcame the goalkeeper of the rival, but the ball ended up on the goalpost.

14 ‘Now Pavkov also had a chance

A nice action was played by Ben, Kanga and Ivanić, who centered Pavkova on the five-pointer, but the attacker of the home team failed to pass the ball into the goal frame.

The first concrete attempt of the red and whites, after Rodić passed on the left side, returned the return to Ivanić, who shot from some twenty meters, but hit the upper part of the bar.

5 ‘Star offensive from the beginning

The introductory minutes of the match at the “Rajko Mitic” stadium were marked by the initiative of Zvezda – Pavkov threatened, but without changing the result.

Stankovic: The strongest team for Proleter

Red Star football coach Dejan Stanković stated that he saw no reason for the players to rest and a combined team, and the strongest possible team will come out on the field against Proleter.