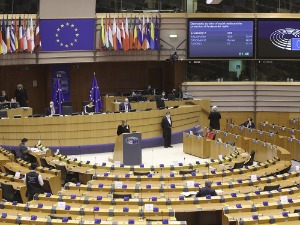 The principle that poverty disappears with employment does not apply in low-income sectors, as well as for those who work in precarious and atypical working conditions, MEPs pointed out, calling for the introduction of a minimum wage and equal working conditions for all.

The resolution on reducing inequality, with a special emphasis on poverty despite employment, was adopted at the plenary session with 365 votes in favor, 118 against, with 208 abstentions, the European Parliament announced, Hina reports.

MEPs supported the Commission’s proposal for an EU directive on minimum wages, assessing it as an important step to ensure that everyone can earn a living from their work, and called on the Commission and Member States to include poverty prevention in the EU’s overall goal of ending poverty. to those already employed.

It was pointed out in the discussion that the directive should ensure that the prescribed minimum wages should always be above the poverty line, and that employers should not deduct expenses such as accommodation, mandatory clothing, tools, personal protection and other equipment from the minimum wage.

Working conditions should be the same for everyone, including those working through digital platforms, which is why MPs cited the legislative framework on minimum working conditions for all workers as an important element in combating “poverty despite employment”.

That legislative framework would also include forms of work in the digital economy that are often characterized by uncertainty.

Existing labor laws and social security provisions, as well as the possibility of collective bargaining, should also apply to workers in the sector, the resolution said.

During the debate, it was warned that 95 million Europeans live in danger of poverty, despite the fact that the European Union is one of the richest areas in the world.

The water utility comes with the announcement: Here are the neighborhoods in the capital that will be left without water

After the scandal, this is Andy’s relationship with Olsa Muhamet and Bora Zeman!