The Netherlands, why the prepare hit the whale’s tail 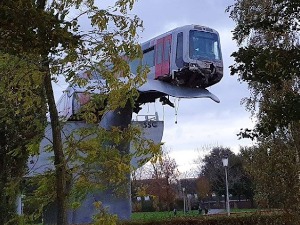 The official report states that the reason for the train jumping off the rails in November last year was unadjusted speed.

After breaking through the fence on the elevated part of the track near Rotterdam, instead of falling into the water ten meters below, the train that travels on the subway line remained hanging in the air, leaning on the metal tail of the whale.

The driver who was alone in the train remained unharmed.

According to the investigation of the cause of the accident, the train was moving at a speed of 57 kilometers per hour on the part of the line where the limit is 35.

It was also determined that the rainy conditions and the reaction time of the train driver influenced the development of the situation.

The authorities emphasized that immediately after the accident, the part of the railway where the accident happened was put out of use.

“Guxo” splits, Ferizaj branch registers with the CEC as “We Dare” – Latest News