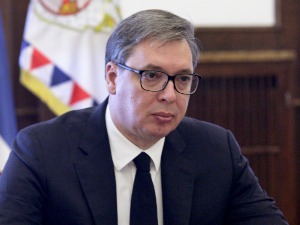 “Last Friday, we were officially informed that Greece is improving relations with Kosovo and raising the level of communication with Pristina,” Vucic said, adding that it was difficult and painful for Serbia, but that he did not want to insult Greece by saying that it had succumbed to pressure.

He added that Spain is also establishing an office with Pristina, at a lower level than Greece, and that this is being done before the continuation of the dialogue in Brussels and before the visit of Matthew Palmer and Miroslav Lajcak. Which, he says, can’t be a coincidence.

“All this is not a coincidence. There is growing pressure from both the United States and the EU to reach a solution, and for them the solution is recognition,” said Vucic.

“It is necessary to put Serbia against the wall, but that is not only the recognition of Kosovo, but in order for Serbia to stop in economic growth as well,” Vucic said.

He cited the example of a Chinese official who said that Kosovo is not everything, but that they want to overthrow the whole of Serbia through Kosovo.

The President of Serbia said that Serbia was number one in Europe in the first quarter and that the GDP was growing from 34 billion euros in 2013 to 50 billion this year.