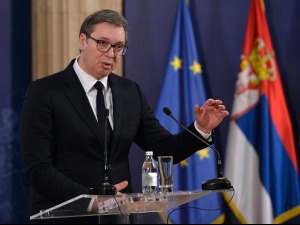 In a conversation with journalist Senad Hadžifejzović, Aleksandar Vučić pointed out that his calls for cooperation, economic and infrastructural connections and pointing out that we are stronger in the region when we speak with one voice are not a creation of the “Serbian world”, as they say, according to Hadžifejzović. individual leaders from the region.

To the host’s impression that it is donation of vaccines from Serbia to BiH, which was the reason for Vučić’s departure to Sarajevo, the defeat of the authorities in BiH, Vučić said that he thought differently, because people in BiH, as he heard from one member of the Presidency, have a problem due to many levels of decision-making.

“I don’t think it is a defeat ever here, but all of us, because we did not unite to act together,” said the President of Serbia.

The vaccine is important in order to save people’s lives, but it is more important what we will do in the future.

We can, said Vučić, either speak with one vote or with two votes, and not with 16 that no one will listen to, on the basis of which they can always quarrel with us and see only how to slap each other.

“We will not do anything like that,” the President of Serbia said.

“Serbia does not interfere where the highway will pass through BiH”

Then he returned to the topic of neighborly relations … and asked: Who doesn’t like to do phytosanitary and veterinary inspections, that trucks don’t wait for us for three or four days, that people pass without problems, that you can get from Tuzla to Belgrade in an hour and 40 minutes … “.

On Hadžifejzović’s remark, if he means “Little Schengen”, Vučić says that everyone can call it whatever they want, to which Hadžifejzović replied that some call him “the Serbian world”.

“The Serbian world? And what is not the Bosniak world?” Vucic asked, followed by the answer: “Because there will be more Serbs than Bosniaks in the Serbian world.”

“Whoever thinks that, shows how short-sighted he is. I have never uttered the phrase ‘Serbian world’. It is important for me to develop the economy,” said Vučić and asked:

“Are the Bosniaks in Novi Pazar the same as those in Sarajevo? They are. You don’t think it suits them to come to Sarajevo.”

To the statement of the presenter that he (Vučić) was accused that both branches of the Sarajevo-Belgrade highway go through Tuzla and Bijeljina, ie through Požega and Višegrad, which is seen as a merger of RS and RS, Vučić asked: “Ah, where would you like to go? ” and added that Serbia does not interfere where the highway will pass through BiH, and that as far as Serbia is concerned, it can also go through Gorazde.

“Looking to the future, think about work”

Vučić pointed out that Belgrade proposes to work together with BiH.

“Whatever you want – we can,” said Vucic, adding that Serbia can accept the concession in BiH, because there is money, but he also noted that if the salary in Serbia is 150 euros higher than in RS and BiH, it will happen. everyone from that country will move to Serbia.

On the accusations of making a “Serbian world”, he said that he might have meant it 30 years ago, as a “drool”.

“Maybe I didn’t understand what was happening then. But for me, it’s a new world to come and see the fast railway from Belgrade to Novi Sad. It’s a new world for me, a new Serbia. You have to work for that, to connect,” he said. is the President of Serbia.

He said he overheard him allegedly killing people in Sarajevo with a sniper rifle.

“I never held a sniper in my hands. I can’t listen to nonsense and lies. I didn’t shoot, but I was in Palam, doing my job,” he stressed.

He said that he listened to all that nonsense and that he would not answer that, because you can never prove anything to malicious people.

He pointed out that people know all that, because otherwise they would have shown it all a long time ago.

Looking to the future, think about work. BiH and we need that. Only the donkey does not change “, he emphasized, and when asked if he really changed, he said that he changed the political party and told everything to the people, and that those who doubt have the right to do so.

“Vučić’s house burned down in the last war”

On the allegations that the aggressor was Vučić, he reminded that the houses of Vučić were burned down in the last war as well, although the Vučićs did not harm anyone. and added that he understood all the exiles and the families of the victims, and that he therefore considered it time to look to the future.

Vučić emphasized that everything is a matter of trust and agreement, and pointed out that Serbia does not mention the secession of RS and its annexation to Serbia.

On the conclusion that he allows Milorad Dodik to talk about it in front of him, Vučić reminded that Sulejman Ugljanin spoke in front of Šefik Džaferović in Novi Pazar about the oppression of Bosniaks in Serbia and demanded the annexation of BiH, without anyone reproaching Džaferović.

“Nobody is talking about splitting, creating new states. We are just talking about working together. I guarantee that Serbia will respect international law, the Dayton Agreement. I predict that we will offer you cooperation. I love RS and I do not hide it, and I love BiH as well.” , Vucic underlined.

Asked about his relationship with Dodik, he said that he is good with him as well as with everyone else, and that they don’t have to think the same.

“I will never return our relations with RS to the time of Milosevic and Karadzic,” the President of Serbia pointed out.

Grenelli Ischingerit: I’m happy to compare our progress with yours whenever you want – Latest News